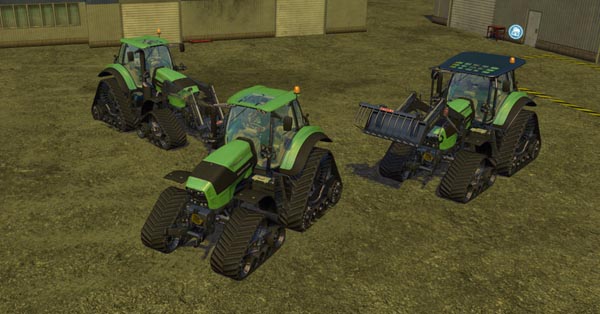 I have the Deutz Fahr 7250 donated a reasonably optimized Frontladerkonsole. The loader is reasonably convenient to install and deep enough to accommodate pallets without problems.

Now I have not added all other versions that I have created for me to play. Versioning is now somewhat confusing, since I’m working on it. Do not worry about version number such as 1.0 or 1.2, which are all on the same stand of the things that I initially did not understand how this works here so.

So, there would now be:

The tractor is otherwise hundred percent the Origiginalmodell from the game. this means:

– Reflections / glare
– Pollution
– Other features of the LS15

Also, tune the gameplay elements, such as price and fuel consumption, so it fits well into the game.

The performance values ??and other parameters correspond to the version 1.2 of Farming Simulator.

I optimized the forestry cage and uploaded all variants in three packs:

You have to unzip the packages.