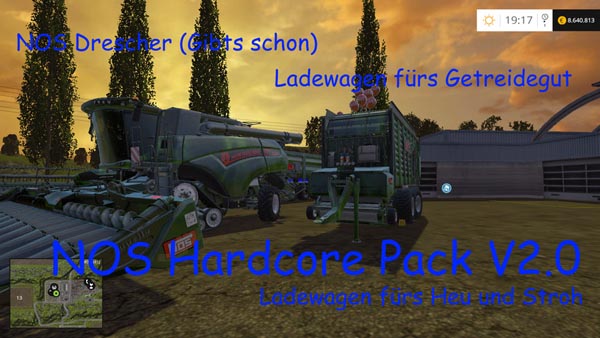 The time has come my NOS Trekker gets young, here in my MOD Pack a thresher, cutting, car, and a surprise-Mod’s inside.

Soso I became finally finished, they had to have been re-Aufgebaut.Sie ??from the game and converting all 3 were completed faster the Drescher now going about 76 km / h and the car goes about 145 KM / H.Scheiben were tinted (Mich it annoying when the sun Seems clean) can be removed if necessary Are you .And hat really I myself had fun harvesting after about 10 hours my fields harvested.

For this work, I had 2 months My Best gegeben.dieses Mod Packet was my most beautiful work I ever make could.

Here the data from Drescher Dinosaurs

ne airbrush painting was missed him.

Lights were upgraded to red.

Interior was renewed Everything. with leather seats

The granary has been extended beyond 1 million liters. so that you do not constantly have to entlerren the loader, but when there is a field ready, you can lerren dan his grain tank.

soso which were until now all the data I einfiell.

Then the data from the car.

He was newly repainted (color choice is no longer required.

And new remuneration was in nor related to red-blue

And finally, a cutter

Was repainted only in dark green

Has an automatic trailer

And he is as a thank you for the free Drescher.

These are the real names.