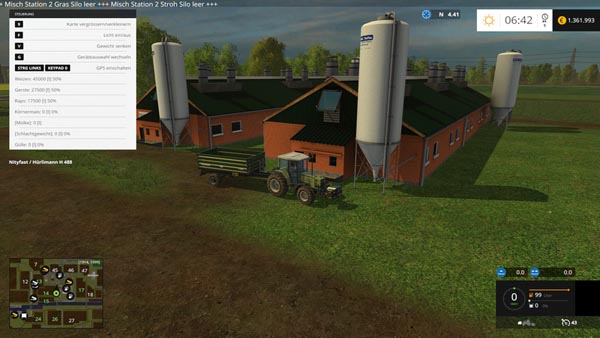 As it has always bothered me that we at the beginning of a game usually has only the combine harvester and as the cereal only sell blunt, I have times “range is” to create a new recovery direction you want to program the pig. Yes I know there is already a pig-Mod, but that is not according to my ideas … But everyone has to decide at the end of yourself!

This mod is a platzierarer pigsty that simulates the pig using the UPK- mods.

With this fold can be the grain of what you reap refine. (Carcase weight of pigs is displayed in the help box at the Stall) After 7 days, the fattening pigs are sold automatically and you get depending on the achieved weight, a reasonable price – Provided one has his pigs fed the whole tower over well! It does not have to fatten a little pigs … Either completely and fully committed, or not at all!

The animals need to grow permanently:

Wheat, barley or corn + + + rapeseed may whey to replace a portion of canola and barley.

Comes out manure and carcass weight of the animals – the animals are well known, automatically sold and the slurry must be worn.

With approximately 15 hectares of arable and normal income they get the pigs fed well!

A known bug is that the first pigs are sold after buying the stable after three days and with too little weight. As compensation, the feed stock at the beginning is half filled, so that one is given this short fattening period, so to speak.

It is enclosed instructions on how to do this pig farm! Actually it is anyway very easy and almost self-explanatory!

The zip file should be unpacked and packed into the modfolder!