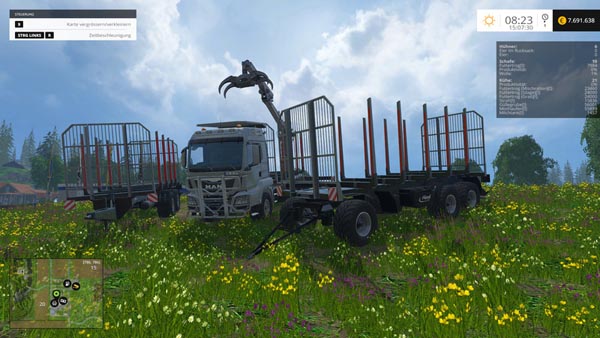 This modpack is my hand still in beta version, since it in LS 15 still necessary to Recoursen and optimizations missing (Scriptdocu & Patches)

I present to you here the MAN TGS 41.480 timber transport with crane & Fliegl TMK timber trailer available. As a base I used the MAN TGS 18.440 forest , which I have completely rebuilt.

Due to the truck body and therefore the number of axles and the model version of MAN’s been changed.

Total weight of the van is about 12.1t (Giants Editor> Mass). In addition, he has received on both sides double supports for firm stand on flat surfaces. Lift the truck only minimally from the chassis, the wheels still touch the ground, thus ensuring a better ground. For uneven and sloping ground I give no guarantee here. In addition, it should be ensured that there is enough free space available around the truck around, because the support system extends far.

There regard to the alignment of the crane structure nor a shortcoming: The truck can not be stored in the loaded state. Blame the CylinderRef’s LS 15 which currently are constantly shifting back to the starting position, whether loading savegame or reset of the vehicles. So please have to unload and then save. This also applies if the associated Fliegl TMK is coupled.

The Fliegl TMK has also been completely rebuilt the base of Fliegl TMK 266 Bull and was. There is not much to say except that he was fully adapted to the MAN TGS 41.480. He, like the MAN a loading area for logs of up to 6 feet in length.

The Pack served me exclusive models and items from the LS 15. In addition, it corresponds to no real role models, but just my imagination, but similarities are not excluded.

As for the control of the crane, I can only tell you that I LS15 with XBox 360 games controler and only a few functions Operating the keyboard. It therefore remains only to mention that expires overall control of MAN crane construction complet gently to me. Keyboard / Mouse player, I guess is the sampling rate (DPI) mouse down (if possible) and goes easy approach to history.